Headquartered in Bend, Oregon, NextJob is a nationwide reemployment solutions company, focused on full employment in America. Founded on the Golden Rule, NextJob’s mission is to provide high quality, one-on-one job coaching and multimedia online learning that is highly effective, accountable and affordable to help all job seekers land jobs and avoid the many impacts of unemployment. Our vision is that everyone who wants a job should have a job. 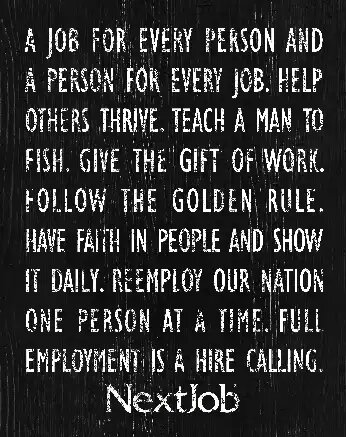 The company provides creative solutions for employers, lenders, state workforce programs, veterans organizations, and schools to deliver state-of-the-art reemployment services with an emphasis on efficiency, effectiveness and return on investment.

Through a team of professional job coaches and a proprietary online job search learning system, NextJob’s primary offering is helping employers reemploy their transitioning employees. Job seekers see a reduction in their duration of unemployment, with many finding work in less than 10 weeks. Our goal is to help the outplacement industry develop more effective, accountable and affordable solutions to address the many poverties of unemployment.

Our vision is that all employers will be able to afford highly effective one-on-one reemployment services for any employee they must lay off, at any level and show a strong return on investment. By focusing on real dollar savings we are proving that employers can truly do the right thing, in a way that fully pays for itself.

NextJob developed the banking industry’s first reemployment offering in 2011 and partnered with Fifth Third Bank to help reemploy homeowners facing foreclosure due to unemployment.  NextJob helped 40% of Fifth Third’s at-risk long term unemployed homeowners  land in jobs in six months and Fifth Third expanded the industry-first initiative bank-wide the next year.  It is now delivering an ROI of over 300%. Positive press, included articles in The Wall Street Journal, The American Banker and The Chicago Tribune.

Since that time, M&T Bank and USAA have launched NextJob’s Homeowner Reemployment program.  As Jay Brinkman, former Chief Economist for the Mortgage Banker’s Association said in 2012, ““When it’s a loan structure issue, you can deal with that, but when it’s an unemployment issue, unless you go out and find them a job there’s not much you can do . . . .”

NextJob’s vision  is that all mortgage borrowers will have the chance to save their homes by getting help to land a job and that the lending industry will broadly implement reemployment services with a strong ROI as a proactive solution for mortgage, credit card, auto loan and other borrower defaults due to unemployment.

NextJob extended its work in Homeowner Reemployment with a service to reemploy borrowers defaulting on student debt.  Millennials have become the largest cohort of our workforce and are known as the most educated and most underemployed generation.  This suggests that a large part of our student debt challenges hinges on borrowers skills in making successful career moves.

We have customized our online job search system to serve Millennials and we’ve added a specialty coaching staff experienced with the Millennial generation.

Our vision is that lenders and owners of student debt will complement their current loss mitigation tools with a Student Reemployment solution that includes a range of interventions from proactive online training to one-on-one coaching.

Student Reemployment will get borrowers on track in their careers so they can leverage their education investment and translate their knowledge, skills and abilities effectively to land a variety of jobs.

Our roots are more than 20 years deep in research and consulting on best practices in government unemployment and workforce programs. We discovered that the greatest opportunity lay in educating job seekers who, largely, do not learn job search well anywhere – in school or in their career.

We developed leading online learning for job search using multimedia to address all learning styles, peer-to-peer interview videos and a teach-show-do methodology. In doing so, we drew on our team’s experience developing the first computer-based multi-media economics course for high schools in America in 2000. Thinking Economics is endorsed by the Council for Economic Education and taught now in over 400 schools nationwide. Through producing it, our team members learned the keys to excellent curriculum design and have applied them to job search learning.

As one agency deputy director put it, we have developed a “virtual job coach” to complement whatever state specific tools an agency has chosen. We found that tools will always evolve; our goal is to make them actionable. Our vision is that every job seeker will be engaged by the agency serving them. We believe that if a WIA Core Service can be provided online, it is our job to provide that option to serve our job seekers and our budgets.

Most students go to school to improve, in some way, their career opportunities. We have developed online curriculum, online classes, tutoring and tools for high schools, colleges and universities to teach their students the fundamentals and best strategies to choose a career and land a job in it.

Our vision is that all schools would be able to complement their career centers with online tools, curriculum and a class that become part of every student’s education. Ultimately, our vision is to help address the root cause of much of the student debt crisis.

Our founder served in the Air Force in France in the 1950s and we have great respect and gratitude for our service members. We have developed customized solutions for the military, including use of the best online tools and our expert military job coaches.

Our vision is that every service member would have the option to complement their current transition services with ongoing job search training tools, job club webinars and a dedicated one-on-one coach to help them on their journey to civilian employment.

The result should be that every veteran will feel confident, directed and prepared to accomplish the mission of making a smooth and successful transition back into civilian life.

Our nation is a charitable one and we have chosen to do our part based on an idea sparked by TOMS Shoes. We decided to follow their one-for-one model in our “Job-for-Job” program by giving away access to our job search software to someone in need, for every reemployment package our customers purchase. Our Job-for-Job partners range from homeless shelters, to disabled veterans organizations to women’s interview clothing charities.  Our goal is to support nonprofits in their mission of self-sufficiency with excellent online learning resources for their clients. Our vision is to help eliminate the many poverties of unemployment by encouraging and supporting nonprofits with an effective tool to give their clients a hand up into employment.